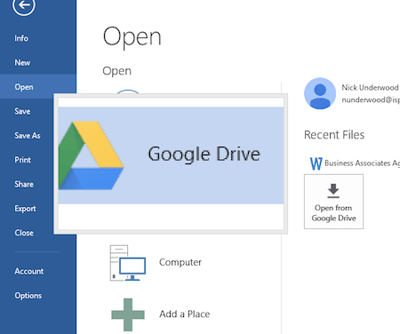 This week, Google took another step in its race to office applications dominance by announcing a Google Drive Plug-In for Microsoft Office users. With this new plug-in, users can save and store documents and other files created in Microsoft Office right to Google Drive for access across devices and platforms. Taking aim at Microsoft’s foray into cloud-based applications, Google is now allowing users to create and edit documents in a program they are familiar with, while still providing the scalability and security Google Drive offers.

This new plug-in is in direct competition with Microsoft’s online cloud-storage system, OneDrive which allows users to create, edit, save, and collaborate on Microsoft Office files across devices.

How the Plug-In Works

Options for Other Microsoft Office Versions

The only catch is that users need to have an active internet connection to collaborate, edit, save, and sync files to Google Drive whereas Google Apps for Work and Microsoft Office 365 offer local storage options in case internet connectivity cannot be achieved.